South Florida was in the middle of a building boom in the mid-1920s when Gwendolyn Maitland, the Scottish Countess of Lauderdale, sailed south from Palm Beach looking for land to develop. She pulled into the New River and after learning the name of the place [a remarkable coincidence – the town was named for Major William Lauderdale, a leader during the Second Seminole War in 1838] and touring about, the Countess set about gaining financial backing. In 1926, the British Improvement Association was formed (it also included the King of Greece), and purchased 8,000 acres of land from Arthur T. Galt, the son of Hugh Taylor Birch’s law partner in Chicago (Birch had purchased most of Fort Lauderdale beach years earlier). The goal of the association was to create Floranada, a resort that would be the rival of Palm Beach. That autumn, South Florida was devastated by a powerful hurricane that no one had foreseen, and the building boom, along with the local economy, collapsed. The Countess’ down payment was returned to her and the land reverted back to Arthur T. Galt.

The twenties era was a time of prosperity in America. The stock market was booming. There was “a chicken in every pot.” It was the Prohibition era, when millions could be made in getting around the law, and “rum-running” from Bimini to the deserted beaches and remote inlets of South Florida was big business. The twenties also witnessed the re-birth of the Ku Klux Klan across America inspired, it has been suggested, by the heroic portrayal of the Klan in D.W. Griffith’s 1915 silent movie, Birth of a Nation. The Daughters of the Confederacy and other groups raised statues to Confederate leaders, and had streets named in their honor in all of the former rebel states, including Florida [Hollywood recently renamed a trio of “Confederate” streets that that been imposed on a historically black neighborhood there]. Jim Crow laws were enacted to separate whites from blacks in the public sphere. In 1927, city leaders directed that the last integrated public beach in Broward would be off limits to people of color; for two days a week only, blacks were permitted to use the overgrown, untended stretch of shore north of Ft. Lauderdale beach.

This beach would not remain wild. In 1946, a development company, Coral Ridge Properties, was formed by James S. Hunt and Stephen A. Calder, and in 1953 paid Arthur T. Galt $19,400,000 for 2,466 acres of land, which was then considered the largest real estate transaction in U.S. history. House and building lot auctions drew hundreds, lured by celebrity promoters like comedian and television host Johnny Carson. Coral Ridge Properties built the area’s first ocean-front hotel, the “deluxe” Galt Ocean Mile Hotel (1957), where L’Hermitage is today; the group later built Ocean Manor (where Carson bought a penthouse unit). The first hirise apartment building in the neighborhood was Edgewater Arms (1958), followed by Ocean Summit, The Fountainhead (once known as the “Rolls-Royce of the Galt” for its lavish amenities), and, in 1965, The Commodore. In the words of one historian, the Galt in the 1960s was becoming “one of the finest hotel and apartment areas in the world.” These building projects meant that the beach would no longer be accessible to people of color. The city then promised the African- American community a new beach of their own, south of Port Everglades inlet - and only accessible by boat. On the Fourth of July 1961, Dr. Von D. Mizell, founder and president of the local NAACP chapter led a peaceful “wade-in” on Ft. Lauderdale beach, and thereafter all of Broward County public beaches were gradually integrated.

By the 1980s the Galt beachfront was completely developed (and, indeed, some properties, like the Days Inn motel next door to the Galleon, were ripe for redevelopment). Much of the land between Galt Ocean Drive and A1A still sat idle, when, in 1988 plans for a Publix supermarket and shopping plaza were announced. A group of residents formed the Galt Owners Association, hired a lawyer, and tried to block the project, urging the city buy the land for a park; this was a futile campaign that resulted only in a Winn-Dixie market instead of a Publix.

In 1993, representatives of the Galt Mile Community Association, dismayed by the boulevard’s dismal appearance – cracked concrete sidewalks, asphalt pavement, concrete utility poles and overhead wiring – began meeting with city officials with the aim of improving the look of the neighborhood. Over 4,000 Galt homeowners were surveyed, with a large majority enthusiastic about the project. In an unusual private/public partnership, there was a self-imposed home owners tax assessed to pay for the $3.2 million project, with $550,000 contributed by the city (which pledged to maintain the improvements). The design was developed and approved in 1994, and the work – buried utilities, pink aggregate sidewalks, narrowed roadway, crosswalk pavers, new traffic signals and signage, new trees and landscaped beds between sidewalk and curb – was completed in 1996. It was the largest capital improvement project of its kind in Florida. 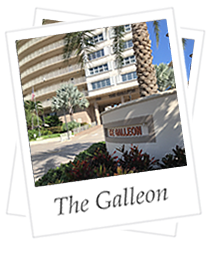